Perne Road roundabout has recently been altered to tighten its geometry. This idea of tightening roundabout geometry has been around for a couple of decades, featuring in a DfT traffic advisory leaflet as early as 1997. The idea was particularly promoted by the Swiss, who have a very “on-road” tradition of providing for cycling. See Resources for more info. 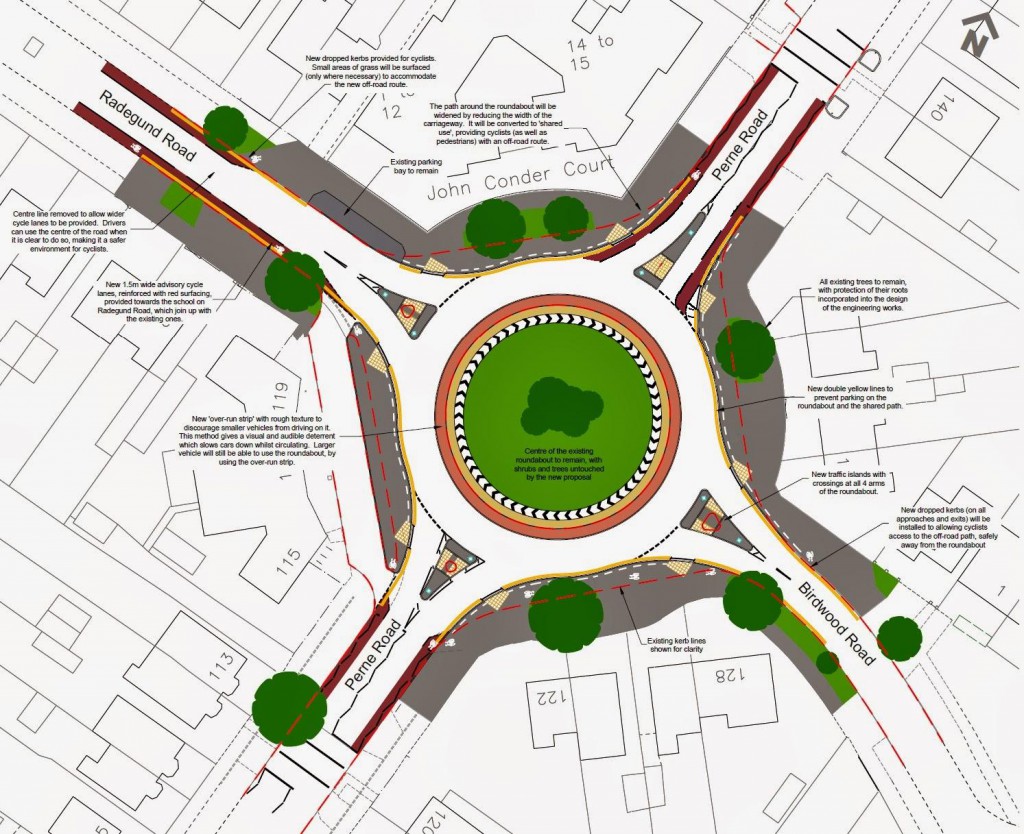 This diagram shows what has been done at Perne Road (on the three arms to the left and bottom), and what I suggest would be closer to Swiss practice on the top right. The red dashes show the kerb line before the alterations.

The key feature of the Swiss design (and indeed of Dutch designs) is that the approach is perpendicular to the roundabout. This means that at the point where the driver is giving way, their wheels are straight. This substantially reduces entry speed. The Swiss stop the cycle lane before the roundabout, to indicate that road users really ought to enter the roundabout in single file. But in practice, cyclists remain alongside the kerb. So in Oxford we continue the cycle lane up to the give way line. This does not seem to cause any problems, nor have any impact on cyclists’ positioning on the roundabout itself.

Even though there’s a cycle lane, I have narrowed the entry down to 4 metres, in accordance with Swiss designs. This should discourage undertaking of large vehicles, and overtaking by large vehicles.

I have marked the cycle lane straight, with an overrun area on the corner, based on a design used in Münster in Germany. The overrun area is textured to discourage use by cyclists. Cyclists need to approach the roundabout perpendicularly and give way, and not leave room for drivers to enter the roundabout in parallel with them. I’ve drawn it tighter than the Münster design (maybe too tight).

I have moved the outside kerb line by about a metre. This imposes the Dutch 12m radius, but drawn from the edge of the traffic lane, rather than the edge of the road. This would have to be tracked to ensure that large vehicles can get round, but it should be approximately correct. The rear wheels of large vehicles overrun the cycle lane, obviously.

Following the Swiss, the exit has been left unchanged (except for the marking of a cycle lane). The openness of the exit reduces the likelihood that a cyclist will get cut-up, and should make it clear whether the cyclist is exiting or continuing round. This arrangement also provides a good-sized triangle for use as a crossing island. This does risk excessive exit speed, making it doubly important that entry and circulation speed is kept low.

To the north of Oxford, there is a complicated and congested set of junctions where roads from several directions meet the ring road. The City Council has identified some of the land in this area as suitable for development, but this would be likely to make the situation worse. 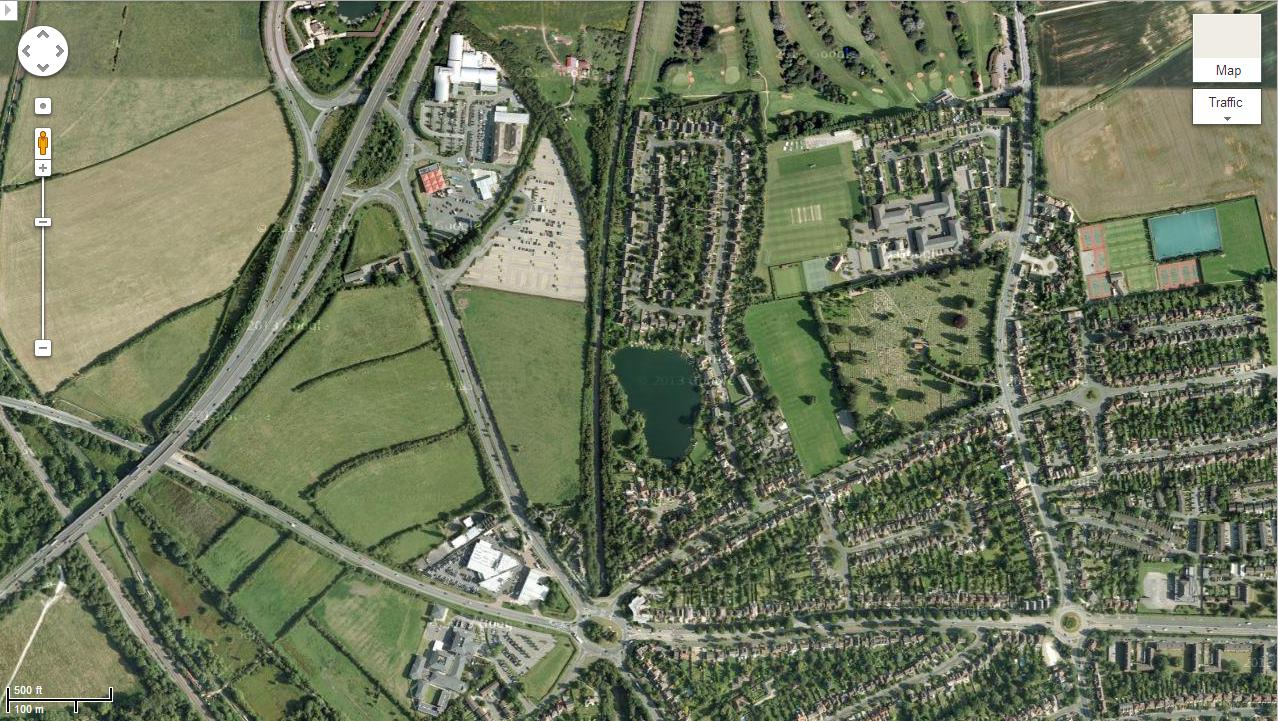 The queues coming from the west (the A40) in the morning are particularly notorious. The A40 brings traffic from Witney, which has seen large-scale housing growth, but has limited public transport (principally buses which get stuck in the traffic). The conventional approach would be to make all the junctions bigger, with traffic lights controlling entry to the roundabouts. The lights would also allow for multi-stage pedestrian/cycle crossings.

While these junction schemes tend to improve traffic flow in the short term, they don’t solve any of the underlying problems. They give no advantage to public transport, and the crossings are too slow to promote cycling. So, if anything, they tend to encourage more traffic.

Instead, we should use these opportunities to think laterally. How can we organise the traffic so that public transport has an advantage? Can we simplify junctions to make them more cycle-friendly? Can the traffic be concentrated so that it feeds a Park & Ride service? Can we create space for liveable housing developments that aren’t cut off by major roads?

My suggestion would be to divert the A40 to Peartree roundabout, with the existing road kept for buses only. This gives a significant advantage to public transport. For people coming from places that aren’t directly served by public transport, the Peartree route will give them easier access to the Park & Ride. In due course, I’d also like to see a railway station at Peartree. 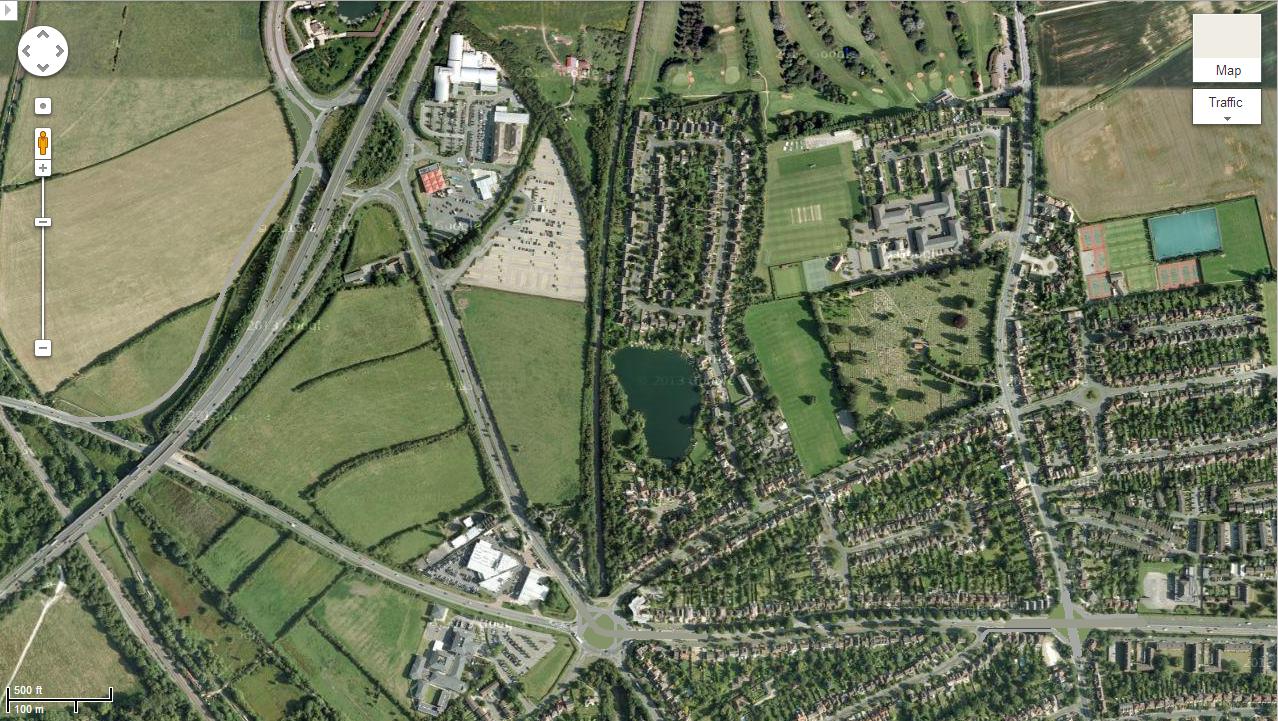 Given the car-based lifestyles of much of the population outside the city, it’s probably inevitable that there are large roads on the edge of the city. But the traffic can be organised so that it does not form an impenetrable barrier, and does not get in the way of good public transport into the city. 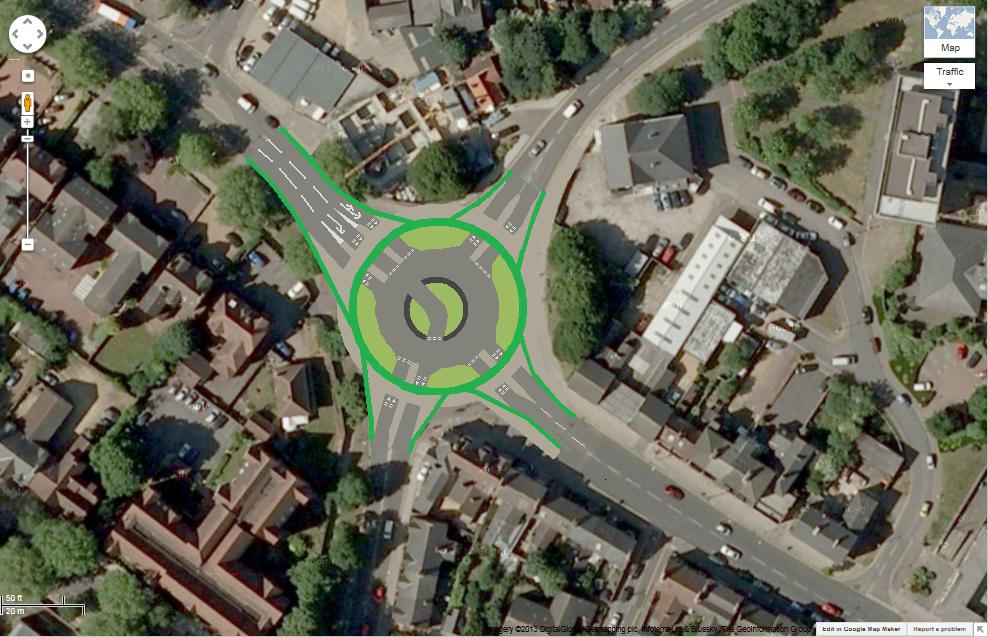 Sometimes, there is room for a Dutch roundabout, but there’s a little too much traffic. This is most likely to be a problem if morning peak traffic is concentrated on one arm of the roundabout. In this situation it is sometimes possible to handle the excess traffic using a bypass lane.

This is a sketch design for a roundabout in Bedford, which has recently been proposed for conversion to a Dutch “turbo” design, but without cycle tracks. This sketch design provides an extra lane from the busiest arm, in this case going through the centre of the roundabout. Unlike the “turbo” design, cyclists can negotiate this roundabout without needing to pull out into the right-hand lane, or switch to the pavement. This design is experimental; if the lane through the centre doesn’t work, the junction will need to be converted to traffic-lights, if it is to be cycle-friendly. 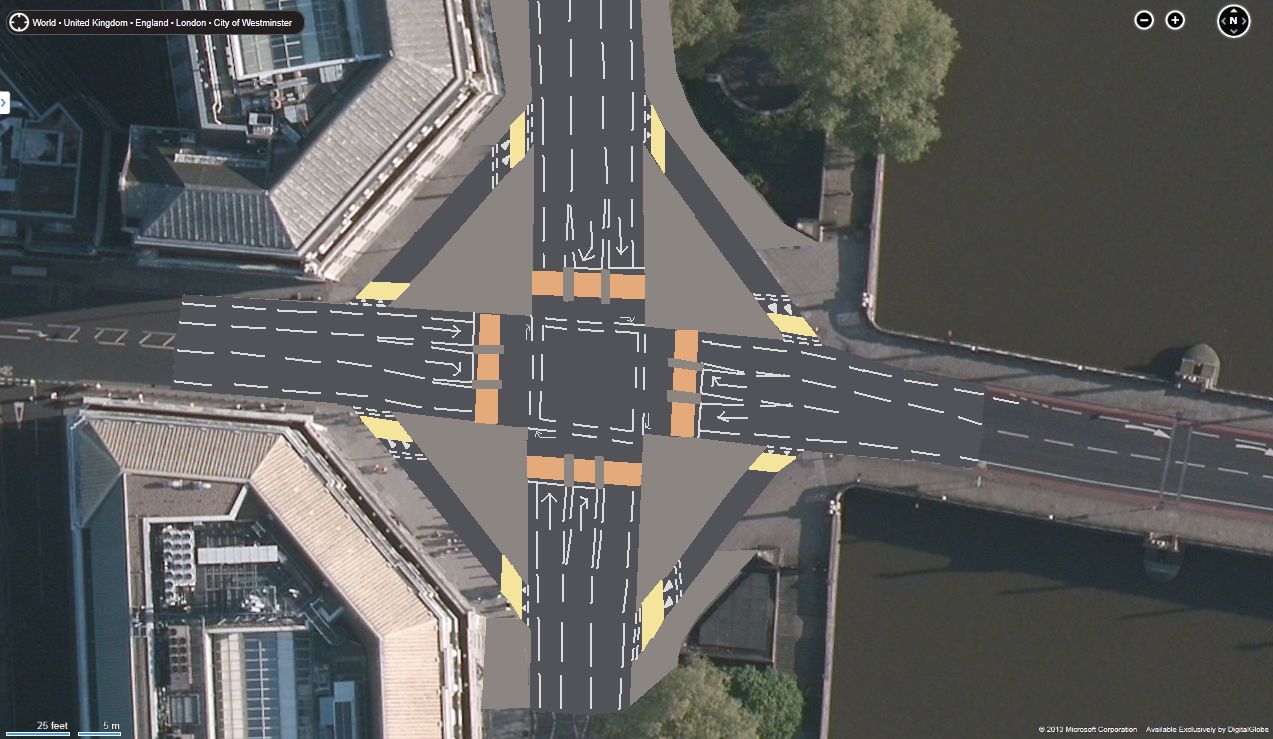 Dutch roundabouts with peripheral priority cycle tracks can only handle 25,000 motor-vehicles per day (and 1500/hour conflicts at any crossing). In situations where there is room for a Dutch roundabout, there may very well be too much traffic. The roundabout on the north side of the river at Lambeth Bridge carries about 50,000 motor-vehicles per day. At that volume, it is arguably better to revert to using traffic lights.

This is a sketch design of a cycle-friendly controlled junction at Lambeth. I’ve used the space to provide left-turn filter lanes. These filter lanes have humps and raised crossings at both ends to keep speed down, but are otherwise uncontrolled. Cycle lanes are marked across the entry and exit to explicitly remind left-turners to check for cyclists. This eliminates some, but not all of the left-turn risk.

The space in the middle of the junction is used to provide right-turn lanes on all four approaches. Small right-turn pockets are provided to allow bikes to make right turns in two stages. Pedestrian islands are provided between each lane, to allow pedestrians to cross in stages on red, if they wish to. The best arrangement is probably to run each of the four entries in turn, rotating clockwise. This allows timings to adjust to cope with peak flows, but also simplifies the signals (allowing far-side secondary signals) and allows the right-turn pockets to get green straight away.

The original aerial imagery is from Bing. 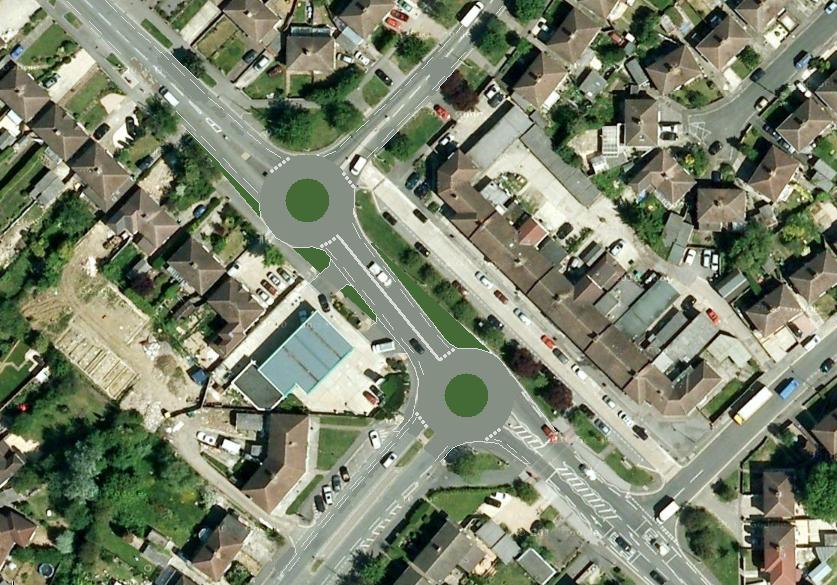 Quite often there isn’t room for a Dutch-style roundabout. The Swiss have experimented with the geometry of roundabouts to make them as cycle-friendly as possible, with cyclists still on-road. This is unlikely to be comfortable enough for family cycling, so alternative quiet routes will also be needed that avoid the area.

The roundabouts need to be big enough so the entries can be tight, but not so big that cars try to overtake bikes on the roundabout. The diameter of the roundabout should be 24-34m, and the circulating carriageway should be no-more-than 8m wide. The Swiss advice is that exits should be quite open, to avoid the risk of cyclists getting cut up on exit. The design can cope with quite high traffic levels – upto 30,000 motor-vehicles per day, according to the Swiss.

This is a sketch design for a pair of mini-roundabouts in Marston, Oxford. The give-way lines have been moved back to make a bigger roundabout with a solid island, and the number of approach lanes reduced to one on each arm. Cycle lanes have been added on all the approaches. The road between the two roundabouts has been narrowed and angled, to slow the traffic. 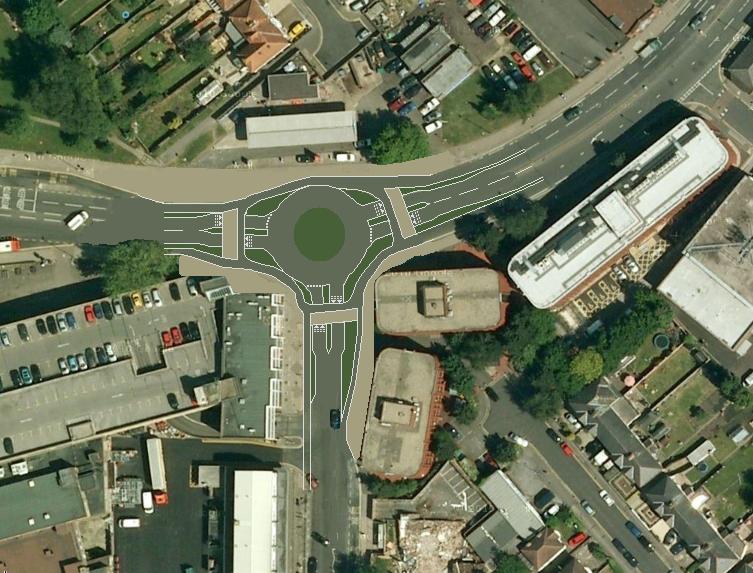 Roundabouts are often used to reduce congestion, but conventional UK designs aren’t cycle-friendly (or pedestrian-friendly). The Dutch have developed a design for an urban cycle-friendly roundabout, but it takes quite a lot of space. The full design has a completely-circular cycle track, set back from the roundabout by 5m (one car-length). The minimum size for the roundabout itself is 25m diameter, with a 13m island. Including pavements, you need a minimum 45m diameter.

This is a sketch design for the junction where Barns Road meets Between Towns Road in Cowley, Oxford. The junction is moderately busy, and is currently a mini-roundabout with a bypass lane. The roads in the area are unnecessarily wide, and there are no reasonable quiet routes. So it makes sense to provide segregated cycle tracks along Between Towns Road, and make the junctions as cycle-friendly as possible.

A full Dutch roundabout doesn’t fit, but by judiciously distorting the circular cycle track, it can just about be squeezed in. It is important that the cycle track splits several metres before each crossing, and cyclists approaching the crossing shouldn’t have any sharp turns. This makes it clear to motorists that the cyclist is crossing, and they should give way.

The roadway had to be extended by a few metres northwards at the junction, into a grassed area. The original aerial imagery is from Google Maps. 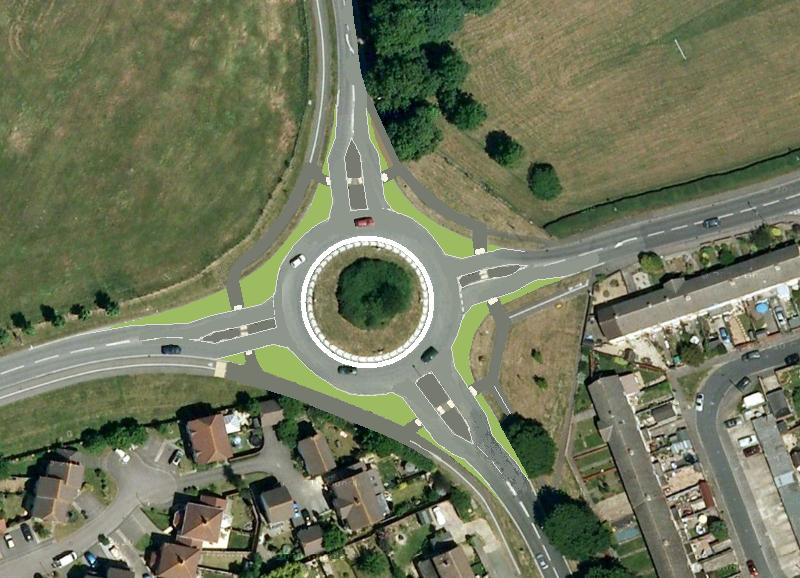 Market towns often have a single-carriageway ring road or bypass with roundabouts. This will usually cross the route between nearby villages and the town, for instance for going to secondary school, visiting friends or shopping.

This is a sketch drawing for the Wootton Road roundabout north of Abingdon. The design is close to the Dutch standard design for such situations, with bottle-shaped islands on each arm to slow the traffic down, and cyclists on tracks, giving way to cross each arm. Most cyclists will go north-south, and will have to give way twice in quick succession at relatively stress-free crossings. This compares reasonably to having to give way once to enter the roundabout.

The green areas are road that would be returned to grass. The existing cycle tracks/pavements and crossing points have been used.

Although most cycling is within cities, there’s no reason why the outer estates should be cut off, and every reason to encourage people to cycle out into the countryside. In an ideal world, there would be excellent tracks, bridges and tunnels alongside the main roads, but sometimes there isn’t space. Quite often the existing junction is a simple oversized roundabout. How do we make that cycle-friendly?

This is a sketch design for a roundabout to the north of Oxford, where Banbury Road crosses the ring road. A number of Oxford’s peripheral roundabouts have already been signalled, and a couple have had lanes cut through the middle (known as hamburger roundabouts or throughabouts). But the best that’s been achieved for cycling is staggered Toucan crossings. Can we do better?