Buses could operate like trams, but only if we find an alternative to drivers checking and selling tickets.

The simplest way to make an excellent bus network for Oxford would be to allow two-way bus operation in Queen Street. This is probably what would happen if Oxford had a tram system. There are similar situations in (for example) Basel and Freiburg, and the trams run straight through the city centre without causing too much of a problem. There are also cities like The Hague or Antwerp where the trams run under the main street. This is very expensive (hundreds of millions of pounds), and would be quite hard to justify. But what these cities have in common is that the trams go through the very heart of the city.

So why are buses different? Why are they so horrible that we want to remove them from our city centres? It’s still rare for a bus to be fully-electric, but they are a lot less noisy and smelly than they used to be. Well-driven hybrids, in particular, are hardly a problem at all, when moving. The main difference is the amount of time buses are stopped, to let people get on and off. The occasional bus isn’t a problem, but in a busy city centre you can quickly end up with a wall of buses, destroying the pedestrian feel of the street.

The length of time for the stop is the result of selling and checking tickets. At peak times, it can take five minutes to take on a full load. At less-busy times, two minutes is quite normal. By contrast, a typical tram stop takes between 15 and 30 seconds.

The usual system for checking tickets on trams is to have random inspections. These are never frequent enough to stop widespread fare-dodging, with 25% or more of people travelling without tickets. Clearly it is fairer if everybody pays.

The solution adopted for bus rapid transit in South America has been to create gated stations at the all the bus stops. A simpler version of this could be considered for Oxford. This would start by having someone to sell tickets at the busiest bus stops at the busiest times, then maybe a couple of people to check tickets, so the rear doors can be used for boarding. It would help if all buses had rear doors. 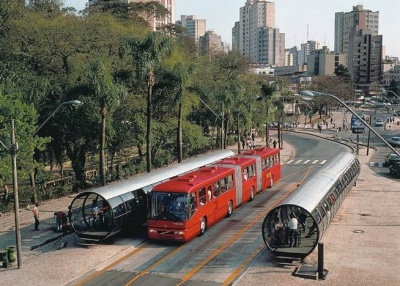 Even so, it wouldn’t be possible to load a full double-decker in less than a minute. The best option then is to split the boarding between two stops, say at Bonn Square and Carfax. Buses would stop at Bonn Square to pick up half a load, then at Carfax to pick up the remainder. This gives more places to catch the bus, and keeps the impact at any location to a minimum. A possible alternative would be to have two stop-positions at one stop. But for this to work efficiently, the buses would need to run in pairs (eg by despatching them in pairs from the railway station).

I think if we seriously focus on improving dwell times, and have multiple credible stops in the city centre, we can run the buses much more like trams, so they have much less impact on the pedestrian environment.

The best arrangement is to run most services from the east through Queen Street (two-way) to the railway station. A few services (mostly the coaches) would still use St Aldates, but there would be many fewer stops (none at the top end), and the pavements could be much wider. Buses from the south would generally run via the new Westgate development and Castle Street to the station. Similarly, buses from the north would run through George Street to the station, reducing the amount of space needed in Magdalen Street, and providing easy interchange with other services. 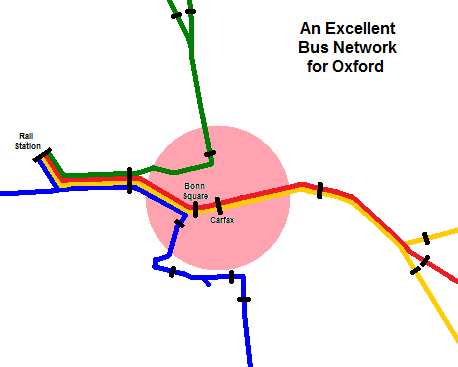