Oxford’s buses are excellent – for getting to the city centre. Based on the inner cordon counts, over 40% of journeys into central Oxford are by bus. Buses run at least every five minutes on all the main corridors.

A large part of this success is due to bus priority, most notably the closure of the High Street to general traffic in 1999, blocking the only direct route from east Oxford.

But all these high-frequency routes don’t add up to a network. If we want a truly excellent public transport system, the individual routes need to connect – and the system needs to be clear and easy to use. At the moment, Oxford can’t really be said to have a joined-up network. In fact, as is typical in the UK, the local bus map doesn’t show what happens in the city centre at all. 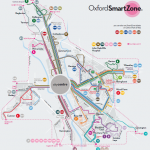 There are particular reasons why the centre is too complicated to map. There are two major bus companies and several smaller ones. Bus services are profitable in Oxford, and this has led to competition and duplication. In the last few years, the two main companies have agreed joint operation of some of the busiest services, but there remains a huge variety of low-frequency services. Despite some joint-ticketing, services are still designed around route-specific ticketing.

In most of the rest of Europe, tickets are valid for a fixed time, so services can be designed for interchange. In the UK (outside London), there’s little coordination between services, even between services run by the same company, and pretty much everything runs into the city centre.

Even if low-frequency services were excluded, the situation in the centre would still be too complicated. This is because the high-frequency services take a variety of routes through the centre, with some running through, some looping round, and some doing both. By comparison, in a Swiss city such as Basel, one-way loops are rare, almost all the routes run two-way, and most of the main services run through. 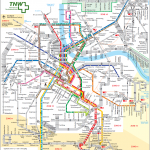 This pattern is partly the result of operating trams, but it also applies to cities such as Winterthur which operate buses. The lack of loops makes it much easier to create a network map. There are fewer lines, and interchanges are clear and simple. It’s easier to understand the services as a network, and the usage reflects that – it’s not just a service into the city centre, but the normal way of getting anywhere in the city. This is one of the key reasons why car use in Basel is remarkably low (under 20%).

The Swiss even stick to two-way operation in quite narrow streets: they just run non-stop. As we’ve found in Queen Street in Oxford, buses have very little impact if they just run through a street slowly. Buses and trams only really get in the way when they stop.

How can we make Oxford’s buses simpler for people to use, for a wider range of journeys? It would be great if we had trams instead of buses, but since buses are cheaper to run, it’s probably better to stick with what we have – fares are high enough already. But even without trams, we can make significant improvements, by learning from the Swiss.

It’s difficult to run services through from one side of Oxford to the other, because demand is much higher on the eastern side, requiring bigger buses. So a lot of services do have to terminate.

We also have to cope with fairly slow loading, with every passenger having to pay the driver or show a pass or ticket. This has led to a situation where each main service has its own stop, and stands there for several minutes loading. Through journeys are tediously slow, and interchange generally requires a walk across town.

Some ticketing reform would certainly help. The central stops could have ticket machines, so the driver only has to check tickets. Tickets above a certain value could be valid for interchange between SmartZone services, for say 30 minutes. Smartcard ticketing could be extended to these 30-minute passes, rather than being limited to day (and longer) passes.

But the real solution is to run the main eastern services two-way, non-stop through Queen Street, to the railway station. This will give those services multiple credible boarding stops, no reason to stand at any stop for very long, and facilitate interchange with other services.

More space would be required for buses at the station, but that’s achievable by moving the taxis to the short-stay car-park.

There would also need to be a clear bus priority route through Frideswide Square. That can be achieved by running the buses along Hythe Bridge Street, switching the general traffic to Park End Street, and crossing over at Worcester Street (a potential layout is shown below). 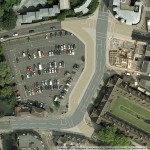 Unfortunately, the latest proposals for Frideswide Square rely on crossing over at a sequence of three roundabouts, which is almost bound to gridlock in the evening peak.

Two-way buses in Queen Street inevitably means compromising space for pedestrians. But if we want to have excellent public transport in Oxford, and get people out of their cars, we need to give the buses the space they need so they can operate as a network.