Walking, cycling, buses, trains and cars have changed little, we just stopped driving when all the parking spaces were taken away.

When looking forward, it can be instructive to look back, and think about what has changed, what hasn’t, and why. In 1965, the principal modes of transport in and serving Oxford were walking, cycling, buses, trains and cars. The technology has improved in a number of respects, but the same basic structure persists. The reason is that the various non-car modes are all pretty well adapted for their respective distance markets, with more equipment and space used at higher speeds for longer distances. The car competes with all modes at all distances, as well as having a near monopoly on suburban and ex-urban journeys above a couple of miles. So while the vehicle technology will continue to evolve, the scope for paradigm-shifting change is limited, and can probably be discounted. No flying cars or jet-packs, sorry. 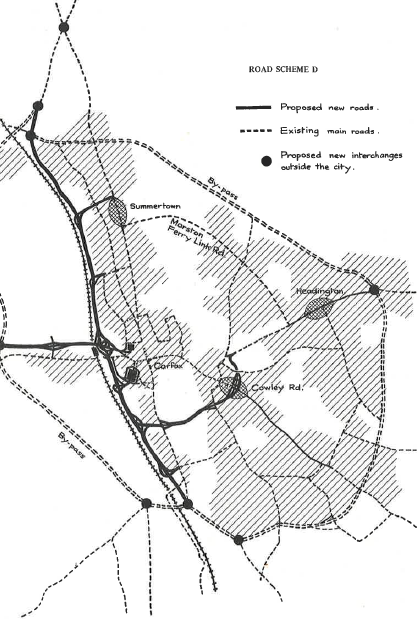 But transport is more than about vehicles. It is also about the infrastructure which society chooses to provide to support the use of different modes. In 1965, there was substantial likelihood that major new urban motorways and huge car-parks would be built. The government’s Traffic in Towns report had shown (in 1963) that cities would need to be substantially rebuilt if cars were to be accommodated. In 1970 Oxford City Council proposed building a spine motorway along the railway, and a motorway link across the river and through East Oxford to the bottom of Headington Hill (see diagram – from Oxford Civic Society’s “Let’s LIVE in Oxford”, 1970). Many other cities did indeed build such roads.

Instead of building roads, Oxford introduced Park and Ride and bus priority to keep traffic levels within the city broadly stable, despite substantial increases in the number of people travelling. Over time, parking has been reduced in the city centre, and has started to be brought under control at the hospital and university sites in Headington. However, parking has been allowed to increase in Cowley, where there is a major car works, and a couple of business parks close to the ring road. Fairly substantial provision for cycling has been made over the years, with facilities on about 50% of the urban main roads. This proportion is very high by UK standards, but still far from complete.

The third key aspect of transport is the location of housing and jobs. Housing growth has largely been directed at the main towns about 10 miles from Oxford (Banbury, Bicester, Didcot, Witney), with Abingdon and Kidlington also significant. It has suited the districts around Oxford to prevent Oxford expanding into its green belt – they have directed development to their own principal settlements instead. The politics of this is stable – it is unlikely to change. These settlements aren’t large enough to justify rail investment on their own, but three of them have benefited from being on the way to somewhere else, establishing a basic half-hourly train service. The other main settlements support frequent bus services.

Employment has become more dispersed over the last 50 years, and people travel further to get to work, with a lot of cross-commuting. Outside Oxford there has been a substantial shift to commuting by car. Central Oxford remains the largest employment concentration, but Headington has become a major location for hospital and university jobs. On the edge of the city, Cowley is also substantial, with people driving from all over the county. As well as the other main settlements, there is also a major employment concentration near Didcot, split between two business parks at Milton and Harwell, almost entirely accessed by car.

So the overall pattern has been for central Oxford to restrict parking, and switch access to walking, cycling, bus and train. But this has been a long process, with traffic levels remaining much the same. Much of the parking is private, and hard to remove. Something similar might be beginning to happen in Headington, but progress is likely to be slow. Outside the city, and in line with much of the rest of the UK, car use has become predominant, though cycling remains above-average. Housing is fairly well concentrated around existing settlements, but employment is becoming dispersed. The ready availability of employment sites outside the city threatens to undermine the approach that has been taken in Oxford. Contrariwise, the attractiveness of living in Oxford might encourage the other settlements to move away from mass car use.

Oxford’s alternative approach is unlikely to be deflected, and the difficulty of overcoming obstacles is likely to reduce over time. By 2065, parking is likely to have been substantially reduced in the city centre, and reduced by enough in Headington to eliminate congestion. The cycle network will have been completed, the bus lanes removed, and pavements widened. There will still be many who drive to Cowley, but there will be a fast bus link to the station, with connections to the rest of the county, so people will have a choice not to drive. The business parks will have been replaced by housing, with the offices relocated to the edge of the city centre as a result of the workplace parking levy. The buses will all be electric, and run through Queen Street. The referendum for a special tax to build a bus tunnel under Queen Street was lost.

Elsewhere in the county, the pressure on economic, health and carbon grounds to reduce car use eventually bore fruit. Bicester eco-town led to the development of a full cycling network in Bicester, and home delivery of groceries eventually allowed the town-centre car parks to be sold for flats. Didcot developed by expanding west, along the new bus spine routes to Milton Heights and Harwell. Diverting the main road through Milton Park had been a stroke of genius – avoiding the cost of a new railway bridge, giving the buses the straight route along the railway, and opening up the land south of the railway for housing. Didcot now extends all the way to the Harwell site, and more than half of Harwell’s workers now live in Didcot. Congestion on the A34 is a distant memory.

The future of local transport is not really dependent on technology, or even on behaviour. What matters is the politics. For five decades we have known that the car needs to be restrained if life in cities is to be improved. Land-owners have slowed down change, but eventually change will come.