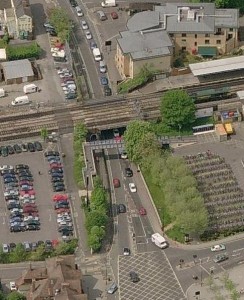 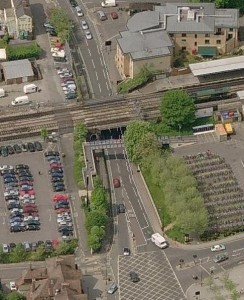 Botley Road under the rail bridge is only 8.05m wide, for a short length, between a wall on one side, and the kerb of a narrow pavement on the other. A 20mph speed limit applies. This is the only section of Botley Road without some form of cycle lane, and filling in this gap has been a top priority for more than a decade.

A 1.2m cycle lane could be marked on both sides (see second picture), leaving about 2.8m lanes for general traffic. The cycle lanes can’t be narrower than that, because of the wall on one side, and drainage grills on the other. At 20mph, 2.8m traffic lanes are adequate. That’s only just enough room for two buses to pass, but manageable.

There have long been ambitions to get this bridge rebuilt a bit wider, though that will only happen if there’s a railway business case for doing so. There is talk that it might happen as part of expanding the station, maybe in 2017.

So – the question is – do we put up with the gap in the cycle lane for years and years, in the hope that one day we might have plenty of space? Or do we squeeze in a cycle lane, at a cost of a few thousand pounds, and risk that it might be superseded in a few years?

Since a cycle lane would probably pay for itself in months, we should just do it. The sooner it is done, the bigger the payback.