Birmingham New Street is the hub of the national rail network. It has long been a dark and confusing place, buried under a shopping centre, with dim lighting and lots of blank walls that all look the same. But a glance up at the departure board always gave me that “where shall we go today” feeling, and suddenly the world seemed a brighter place.

It was hard to recommend New Street as a place to change between trains, so the railway made a virtue of running through services. Which is a pity, because sitting in a train in the bowels of the station is hardly the best way to see Birmingham. In fact, unlike many cities, the station is in the heart of the city centre – in two minutes you could be on the main shopping street, or sunning yourself in Victoria Square.

This comprehensive pattern of through workings comes at a cost. It means that services are a bit irregular, don’t depart from consistent platforms, and are prone to delay. In fact, small delays are endemic. With some trains running head on, some reversing, and some terminating, they inevitably get in each other’s way. The reversals in the high-numbered platforms, in particular, have never really worked.

New Street is currently being rebuilt, with a huge atrium to let in the light. It will be a much more pleasant place to change. At platform level it will be brighter, though still pretty disorientating. But the main improvement is that there will be a large central concourse, big enough to let you get your bearings, rather than just follow the signs.

We should take this opportunity to simplify the pattern of services. Instead of alternating between head-on and reversing, the main CrossCountry services would all run head-on. This will allow departure platforms to be standardised, and substantially reduce delays. It will inevitably force a few people to change who did not have to before, but the overall effect should be substantially positive.

The great virtue of simplifying the service pattern is that it will demystify New Street. The staff will soon get used to the idea, and be able to tell you which platform you need without a second thought. But it will also make it a lot easier for everybody to understand. Rail travel shouldn’t be a great mystery. It should be as easy as ABC.

The platforms would be roughly as follows: 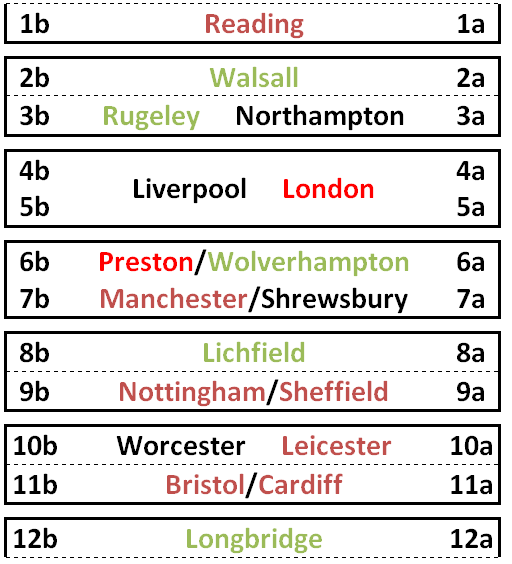