(Not) Going the Distance

Cycling in Oxford is a fairly short-distance activity. Most workplaces are within a couple of miles of home. Secondary schools a mile or so, the shops somewhere in-between. These distances are slightly-annoying to walk, but easy to cycle. There’s no need for special cycling gear, and the chance of getting caught out in the rain is fairly low.

So if you want a high modal share for cycling, it’s really important to have origins and destinations fairly close together, in a “compact” city. The optimal situation is to have shops and offices concentrated in the city centre, with inconvenient car-parking.

Is Oxford particularly unusual? We can look at the average bike-commuting distance in the census, to make some comparisons. While commuting only accounts for about a quarter of journeys, it gives some idea about the character of cycling in each area.

These figures are for England and Wales, excluding London, ordered by the number of cycle commuters in each area. Oxford and Cambridge are quite similar, with average distances about 2.4km (about 1.5 miles). The two highest figures are for authorities which cover the outer suburbs of Bristol and Cambridge, respectively. The other high figures are for larger cities (and York). The value for Oxford seems to be near the bottom of the range, but not at all untypical. The overall conclusion is that – outside the major cities – short distances are the norm. 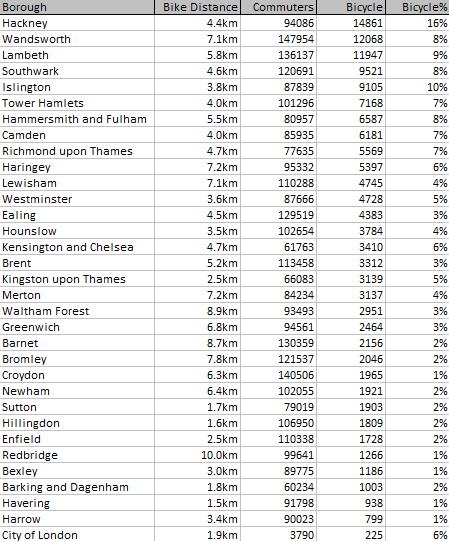 Some of these average distances are very high, and it would be fair to say that cycle commuting has a rather different character in London. But if you look at the outer boroughs, where the numbers of cyclists are lower, there seem to be two different effects. For some boroughs the average distance is very high: these are boroughs where the dominant destination is central London. In contrast, some are very low: these are places where cycling to central London hasn’t become fashionable, and you just have some very local commutes. Slightly more encouraging is somewhere like Kingston, which has a reasonable volume of cyclists and a fairly “normal” average commuting distance.

My impression is that cycling in London has become too dominated by unusually-long commutes. Such commutes aren’t representative of the mass of short journeys that are characteristic of a high-modal-split situation. London needs to refocus on a dispersed pattern of short-distance trips closer to home, if its revolution is to succeed. This will require a much more dispersed pattern of interventions, rather than focusing on a handful of routes. In effect, pretty much every road needs to be cycle-friendly.