There are a large and growing number of people commuting by car into Oxford from beyond the city fringe (the big red 19000 arrow in the diagram below). We haven’t provided public transport of sufficient attractiveness to get people out of their cars. The consequence has been severe congestion on the outskirts of Oxford, on Botley Road and Abingdon Road, and around the hospital.

Oxford has successfully used bus lanes on several corridors to give buses priority. The closure of the High Street to through traffic in 1999 had a similar effect, making the cars go the long way round. Coupled with parking restrictions, and cycling and walking, this has been very successful in reducing car use within the city, especially to the city centre – where the car modal split is 10%.

There are two other major centres of employment in the suburbs: Headington and Cowley. The main employers in Headington are the hospitals and the universities, and they have only been allowed to develop on condition that they limit parking. This has been reasonably successful, mostly as a result of people walking and cycling from within the city. In Cowley, the major employment site is the car works, and the business park that was developed on part of it, both next to the ring road. There is little parking restraint, though a fair number of people walk and cycle.

In terms of commuting from the rest of Oxfordshire, beyond the city fringe, the three main employment sites are all important:

Some of these drivers will be using Park&Ride, but there are only about 4000 spaces available, and they have to be shared with drivers from the fringe, and from further afield. People driving to the Park&Ride are also contributing to the congestion on the outskirts of the city. We need a significant increase in the number of people using public transport from further away. 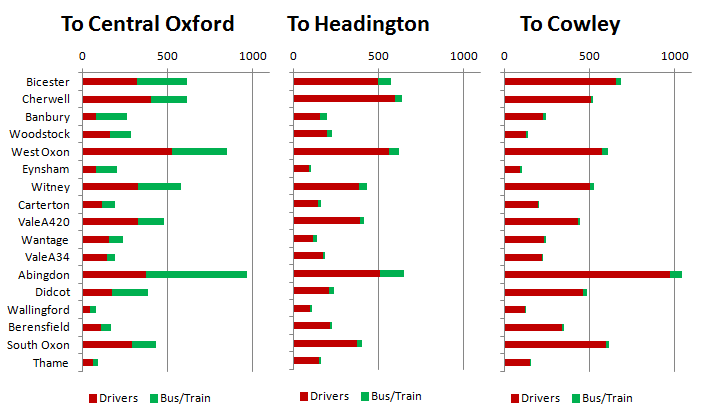 The first chart shows where people are commuting to central Oxford from the rest of Oxfordshire, beyond the city fringe. The origins are in rough order, going anti-clockwise around the city, with the principal towns separated out (Cherwell, West Oxon, ValeA420, ValeA34 and South Oxon cover the remainder).

There are respectable levels of public transport use, particularly from Didcot and Banbury (half-hourly rail), Abingdon and Witney (buses every 10 minutes or better) and West Oxon (hourly train). But many still drive, despite the congestion: public transport is far from being dominant, though it is definitely a contender.

The second chart shows the situation for Headington. While some people use conventional public transport, it’s mainly from Abingdon (there are three buses per hour direct from Abingdon to the main hospital, plus parking restrictions to support its use). The third chart, for Cowley, shows how public transport is almost irrelevant.

While there has often been talk of reviving the railway line to Cowley, a bus service would be the starting point, probably running fast to Cowley Centre, then via Garsington Road to Blackbird Leys. This would give it an all-day market. For Headington, a bus service along London Road almost to Headington shops, then into the hospital and on to Northway and Barton West might work better than the existing indirect service via Marston.

But doesn’t this mean yet more buses in the city centre? Yes a few, though partly it is about rearranging existing services. The key problem with buses in the centre is boarding times, and that can probably be tackled by increasing use of smartcards and off-bus ticket purchase.

By looking at where people currently travel by public transport, and where people drive, we can see where and how public transport is most likely to work. It takes a lot of people travelling for a variety of purposes throughout the day to make a successful public transport service. Oxford has an excellent bus system for a medium-sized city, and with a bit more traffic management, it can be adapted to work well for journeys from the rest of the County as well.