Oxford is one of the most expensive places to live in Britain. It is very successful, economically. The local population is expected to grow and grow – where are they going to live? Should we just let people commute in from the surrounding towns, or should we build on the green belt?

More than half of Oxford’s workers commute from outside the city. Public transport isn’t good enough and many people drive, resulting in terrible congestion. There are (far) too many commuters to re-house them in new estates on the edge of Oxford, even if we wanted to. So whatever else happens, the commuting problem must be tackled, by improving public transport.

Do we need to put housing in specific places to support fixing the commuting problem? Probably not. Bus services operate commercially and can provide for a high proportion of the demand, to the city centre at least, if they are given priority over cars. Some rail services are viable, but only as part of services running through to Reading, Birmingham and London. So the main solution will be bus priority.

Is there a case for building in Oxford’s green belt? The main virtue of doing so is that most of the people would commute into Oxford, so it addresses Oxford’s shortfall of housing more directly. Many would probably walk, cycle or get the bus to work. The diagram shows what happens with existing developments on the edge of the city, and how that compares to commuting from the main towns. 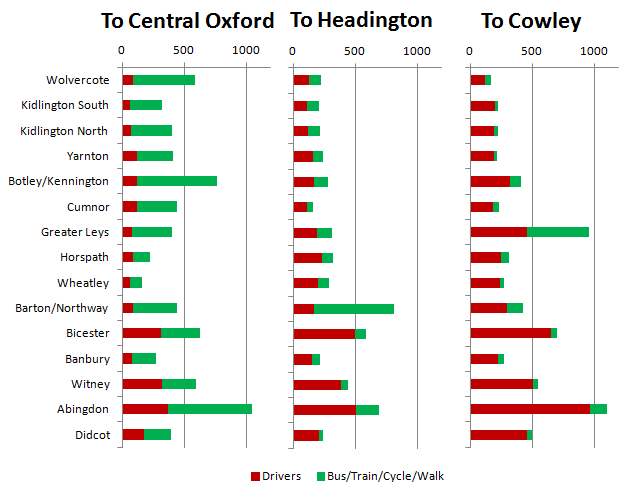 The bars from Wolvercote down to Barton/Northway are in rough order around the city starting from the north and going anti-clockwise. The proportion driving into the city is 15-20% for the areas with concentrated development and frequent bus services, rising to 37% for the Horspath and Wheatley areas. By comparison, the proportion driving from Abingdon is 33%. When buses are given better priority, we’d hope to be able to get the figure for the main towns down to about 20%, so the case for building in the green belt for city centre workers isn’t compelling.

There is probably a case for building in the green belt for Headington workers, however. The nearest equivalent area is Barton/Northway, and the effectiveness of the parking restrictions at the hospitals and university sites is very clear. The proportion driving to work in Headington is only 19%, and markedly better than anything that is likely to be achieved from the county towns. This bodes well for the Barton West development. The Barton West site could sensibly be extended over the city boundary, as long as it stays within easy walking distance of the main Headington employment sites. Such housing might attract some commuters to Cowley, but the numbers will be fairly small.

It is harder to make a case for building in the green belt for Cowley workers. The nearest equivalent area is Greater Leys (including part of Blackbird Leys), where the driving rate to Cowley is 45%. With public transport improvements, it might well be possible to match that from places like Bicester and Witney. The problem with car-based development is that it will also generate car-based shopping, leisure and educational-escort trips. The best strategy for the moment is therefore to stick to redeveloping sites in the Cowley area, gradually increasing the density, and improving walking and cycling facilities (preferably backed by parking restrictions).

The other site where house-building is often considered is to the west of Kidlington. The proportion who would likely drive to central Oxford is reasonably low (about 22%), but sites beyond the green belt could probably be just as good. The main reason for building in that area is to serve the major employment site just to the north of Kidlington. This results in substantial in-commuting, almost all by car. Any development should therefore focus on that employment site.

Overall, with the exception of Headington, the case for building houses in the green belt for Oxford workers does not look strong. It would be just as good to develop around existing centres further afield, and concentrate on improving their public transport links to Oxford. Those public transport links need to be improved anyway. There might be a case for development east of the car works, but this should only be developed if parking restrictions are introduced.