How UK railways improve – by carefully developing what is already there, rather than building miles of new lines.

The West Coast Main Line has dedicated fast lines (shown in red on the map below) for most of the way from London to Crewe, but there is a gap in the Stafford area. Fifteen years ago, the plan was to build a Stafford bypass, taking fast trains past three flat junctions on tight curves, at Colwich, Stafford and Norton Bridge. This consisted of a flyover at Colwich junction, so all fast trains would head towards Stoke, then a new line north of Stafford for trains to switch back to the line to Crewe (shown in yellow). But the economics didn’t stack up. 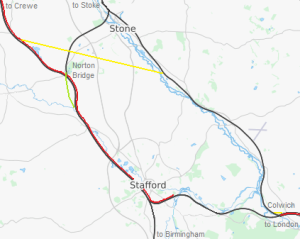 Instead, what is currently being built is much simpler – a flyover at just one of the three junctions, Norton Bridge (shown in green). Doesn’t this just leave the other two problem junctions unresolved? No – and this is the cunning part.

While ideally the fast trains would have a pair of lines to themselves, this isn’t actually essential unless the railway is close to maximum capacity. You can get a decent capacity for high speed trains just by eliminating conflicting moves. The odd two-track bottleneck is quite tolerable, as long as there are no flat junctions.

This has already been used to good effect between Rugby and Nuneaton. The fast and slow lines are combined in the northbound direction for a few miles, because a motorway bridge was built too narrow. This also, very cleverly, avoided the need for a new flyover at Rugby.

The cunning part of the Norton Bridge project is that the four-track railway between Crewe and Stafford will be paired by route, with services for the Trent Valley using the fast lines, and services for Birmingham using the slow lines. The speed of the slow lines has been increased to 100mph, and there are no intermediate stations, so journey times will be unaffected. This creates a conflict-free path for northbound fast services, increasing capacity. It also means there can be fewer sets of points south of Stafford station, allowing the track to be canted (tilted) for higher speeds.

In terms of existing passenger services, the southbound Trent Valley stopper will use the main line from Norton Bridge to Colwich, stopping at Stafford. Northbound fast services to Stoke will divert via Stafford and Norton Bridge, allowing Colwich to be reconfigured for higher speeds.

Freight is a bit more complicated, but the main requirement for freight is capacity, not speed. To remove the conflict, freight can be diverted away from the Trent Valley, via Penkridge, Willenhall, Walsall, Sutton Park and Water Eaton to Nuneaton.

This is how the conventional railway increases its capacity and speed, by carefully organising slow traffic out of the way, and removing conflicts, leaving a clear route for fast traffic. In effect, the two-track section is turning red.

The next cunning plan will probably be to reconfigure Crewe. The slower services can be routed to use the freight underpasses, though they will need new platforms and signalling. This will allow the constrained junction north of the station to be moved to the south, where there is much more room. This doesn’t need to be a flying junction, because capacity isn’t as tight when most of the trains are stopping, but the speed for Manchester services can be increased to a lot more than the current 20mph.