We are where we are. History has given British cities comprehensive bus services, too much car parking, and hardly any provision for cycling. In the short term, buses are probably the most effective way to get people out of their cars, but bikes can have a major supporting role.

Path dependency is the idea that our situation is influenced by historical choices, which effectively limit our scope for subsequent change. It doesn’t really matter whether those past choices were right or wrong; we are where we are. That doesn’t necessarily mean that we can’t copy what has happened elsewhere, just that it will be easier and more effective to build on what we’ve already done, rather than start afresh.

A key historical choice for British cities can be traced back to the Great Fire of London in 1666. The fire spread rapidly due to narrow medieval streets, with the upper floors jettied out. After the Great Fire, the streets were rebuilt on the same alignments, but wider. This principle was gradually applied elsewhere, and pretty much every British town has fairly wide (15m or so) main streets as a result.

Some countries in mainland Europe adopted a similar pattern of widened streets, but not all. Haussmann built boulevards (much wider streets with trees) in nineteenth-century Paris, partly for military reasons, partly to clear out slums, and these were copied in many other cities. Vienna built a boulevard in a ring around its centre. Some other – typically poorer – countries kept their dense narrow streets.

Centuries passed, and the consequence of these wider streets was that cities were open to the invasion of motor traffic – first the bus (or tram), and subsequently the motor car. Buses could run direct into the city centre, and this allowed the building of extensive suburbs. Later, when people owned cars, they could likewise drive into the city, and places were found for them to park.

It all came to a head in the seventies, when people started to address the problem that cars had become, but in many ways it was too late – there were already too many parking spaces.

Cities which had retained their narrow medieval streets were in a different situation. Bus services never really developed, or were limited to the edge of the city centre. Suburbs developed a bit later, and roads to the suburbs were built wider, so bikes didn’t get in the way of cars. The narrow streets in the centre soon filled up with cars. There were few places to park, except in the street. When eventually the streets were reclaimed for pedestrians, there was nowhere to park, and the traffic mostly evaporated. People just had to ride their bikes instead.

In Britain, we also pedestrianized our city centres. But we felt obliged to build new roads so that people could get to their car parks. Many British towns and cities have a dual carriageway around the centre, and large roundabouts or gyratories at the junctions. Those roads have allowed further increases in parking, with new multi-storey car parks, and offices with basement parking.

So where do we go from here? Using cars in cities is hugely inefficient, taking up acres of roadspace, and causing endemic congestion. Our streets have been adapted to try to cope with the peak hour – if we want to reclaim some space, we need to reduce driving to work. There is a big concentration of workplaces in city centres, with many people still driving, despite the availability of alternatives. For instance this map of Oxford shows where people are using their car to get to work (though note that this includes a fair number of people who park at the Park & Ride). 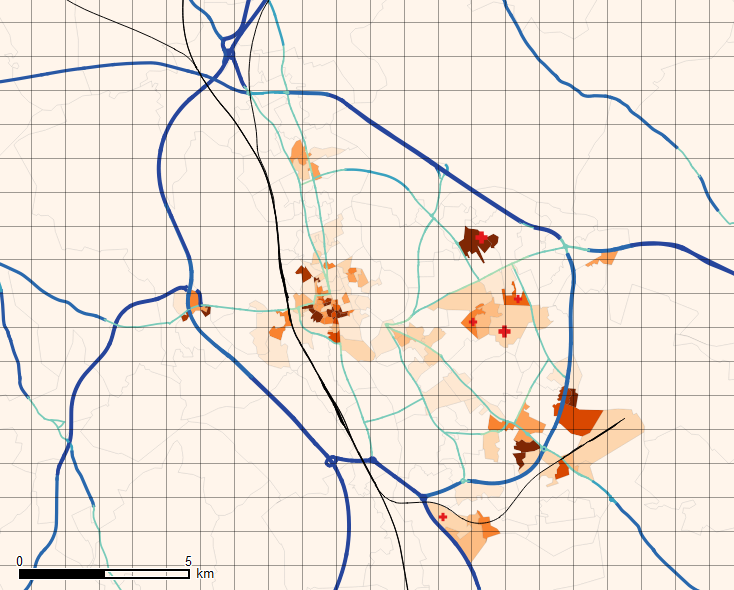 Driving numbers from the 2011 census, table WP703EW (modal figures for each workplace zone).

Our experience in Oxford is that it is possible to induce modal shift by closing roads. But there’s a limit to how far you can take this – you have to leave reasonable routes available for deliveries. The root of the problem is that people will carry on driving to work until there is nowhere for them to park. Reducing the amount of parking is difficult. Councils can stop new parking from being provided, but have little influence over existing parking. Landowners have some incentive to build on car parks, but mostly they won’t.

Let’s assume this process can be speeded up, by using a workplace parking levy to increase the incentive, getting landowners to take a more enlightened approach, or introducing retrospective planning control. How will the drivers travel to work in the city centre instead? The base assumption has to be that people will use the alternatives roughly in the same proportions as currently. In most British cities, that means a small amount of walking and cycling, with a clear majority using public transport. In a few cities, there are a good range of rail services, but after rail, the principal alternative is the bus.

There is only one city (Cambridge) where cycling is substantially more important than the bus, as a means of commuting to the city centre. There are only two others (Portsmouth and York) where buses and cycling are equally important. And only three more (Oxford, Bristol and central London), where cycling is more than half of bus use. Even in Cambridge, it’s recognized that improving bus services is essential, because many people are commuting from places that are too far away for most to want to cycle.

Many people wouldn’t be seen dead on a bus – buses are regarded as too downmarket. Cyclists and pedestrians can also be quite hostile to the idea of buses, especially if they feel threatened by them. But the image of the bus has been transformed in places like London, Brighton and Oxford, by giving buses priority. Politically, to get away with restricting parking, you have to provide reasonable alternatives, so rehabilitating the bus is absolutely essential.

While buses could provide for most journeys into city centres, there are good reasons for also promoting cycling. Cycling is good for taking some of the peak load, and for catering for shorter journeys. Cycling is also better at providing for journeys within the suburbs.

The widespread use of buses in British cities is essential background to understanding the likely space that might be available for cycling on main roads. Bus lanes need to be provided to improve the quality of the bus service. So the main way to provide for cycling is to allow cyclists to use the bus lanes too. This caters for a fair range of adult cyclists, especially if bus drivers are trained in how to share appropriately. Where the road is too narrow for bus lanes, there’s usually room to squeeze in cycle lanes. The main difficulty is removing residential parking.

Clearly, this use of bus lanes and narrow cycle lanes is not ideal from the cyclists’ point-of-view. It certainly isn’t as good as has routinely been achieved in much of the Netherlands. But taking space from buses to provide more room for cyclists would be a backwards step in the British situation. We need the buses to get people out of their cars, so that in due course there can be more space for cycling as well.

The situation isn’t the same in all British cities – most have rather more car traffic than Oxford. With bigger roads, there are more junctions that will be difficult to make cycle-friendly. In those situations, the initial provision for bikes is more likely to involve back routes and segregated links for critical stretches where there aren’t alternatives (eg river, railway and major road crossings). But away from the worst of the traffic, it should be possible to make provision for cycling along main roads that is acceptable to most adults.

If we’re to stand a chance of making our cities into wonderful places to live and work (and indeed, efficient places to do business), we need to focus on reducing car traffic, and use whatever tools are necessary to that task. In Britain, we have a substantial history of providing buses, so a quality bus service needs to be the first priority for our streets. That inevitably leaves less room for bikes, but there is still enough room for cycling to play a substantial supporting role. It’s tricky getting the balance right between buses and bikes, especially if people insist on simply advocating for one or the other. But there is a huge opportunity to provide a good range of alternatives to driving, if we accept that both bus and cycle provision are required.