Whether trains are run by public or private companies, most services will be specified by government and organised by geographical area. But where should the boundaries be?

There’s often a tendency to run the long-distance services separately, because they are less dependent on public subsidy. Arguably, long-distance and local services need a different style of management, and the conventional wisdom was that it would be hard for one company to do both. But having separate companies means additional interfaces, unresolved conflicts, bigger meetings, and meetings instead of phone calls. Alternatively, it might be better if companies were small and focused: they certainly seem to perform better, especially if they are self-contained.

Since privatisation, the boundaries between franchises have changed. Some franchises have been combined to make for a single large operator in a region – creating Greater Western and Anglia. A franchise for Wales was created, to match the political geography, and Central Trains was split up because it was sprawling, unfocused, and performing badly. The local services in the north east were combined with those in the north west, but Transpennine was separated out.

Organising services by region seems to be effective. There doesn’t seem to any real problem with combining local and long-distance services. Nobody seems to place any great value on franchises competing directly with each other. So for a lot of the country, the question is pretty much settled, from Anglia clockwise around London to Chiltern, plus Wales, Merseyrail and Scotland.

But the organisation of services in the rest of the country is unresolved. This comprises the services currently run by East Coast, Northern, Transpennine, East Midlands, West Coast, CrossCountry, and London Midland. The perennial problem is the local services, which require substantial subsidy. It makes sense to coordinate them with the mainline services, to maximise connecting revenue, but it also makes sense to focus on local journeys into the major cities, and follow a regional political agenda. Maybe one day the cities will restrict car traffic, reducing the subsidy required.

In the North, despite a certain amount of political cooperation, the two sides of the Pennines are really quite separate. I think it makes more sense to combine the local services around Manchester with West Coast, and the local services in Yorkshire with East Coast.

There are a number of options with Transpennine services. In some ways it makes sense running services for long distances. Passengers make all sorts of overlapping journeys, and through-running reduces the need for interchange. But it adds to operational complexity – trains have to be fuelled and cleaned away from their home depot, and there have to be small driver and conductor depots. And the further you run, the more chance of a delay. This isn’t a sensible way to operate low-margin low-frequency services.

It’s better to split operations at natural thresholds, either places where there is little traffic, or where almost everybody changes trains anyway. Manchester provides a natural hub, so I think it is better to split services there, with East Coast providing the main services across the Pennines, and down to Nottingham. East Midlands would then concentrate on covering the east-west flows further south.

What people want from the railways is a well-managed public service. A proliferation of operators doesn’t help, and we should move to a situation where each region has one main operator, with Network Rail organised in the same way.

The map shows a possible split. 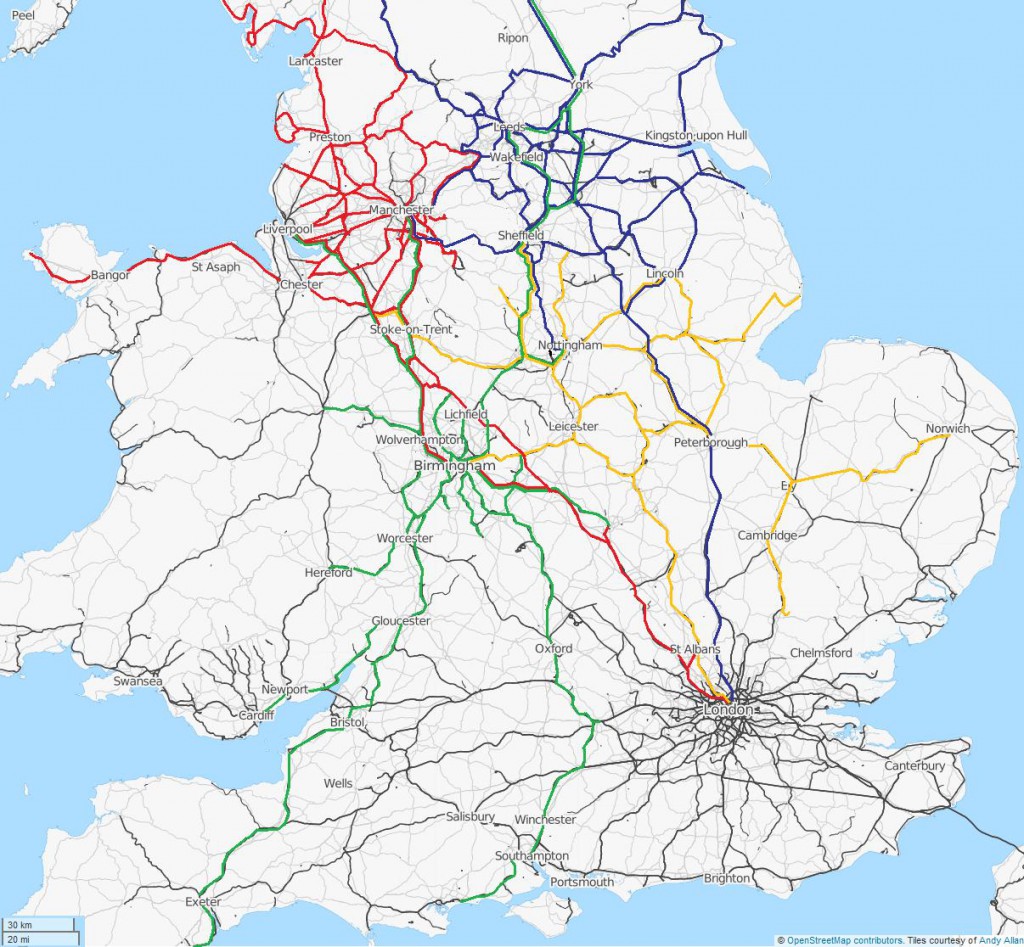