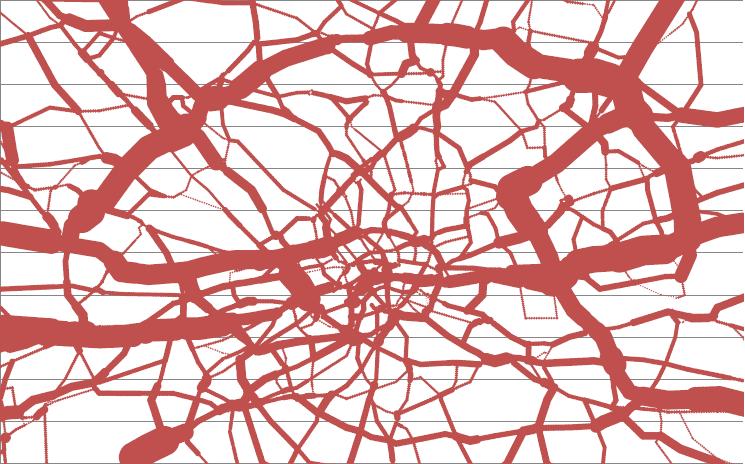 This chart shows motor-traffic volumes on main roads (A roads) in inner London. The data is from the DfT’s traffic counts for 2012, with junction codings made consistent (not a trivial task).

There are huge traffic flows to the west, using the two big roads (the A4 and the A40). If you provide big fast roads, they fill with traffic (which then needs somewhere to park). Other parts of inner London, notably to the north, manage with roads that are nowhere near as big. Quite a lot of this traffic is unnecessary.

The second observation is that flows can vary quite substantially along a route. Much of the traffic is short-distance: avoid falling into the trap of thinking that there’s lots of long-distance traffic that needs through routes. Most journeys from outer to central London are by rail, not road. This effect can also be seen in the way that flows diminish away from the big roads. Inner London has excellent public transport, and unless there’s a quasi-motorway, most people will avoid driving for any distance.

The policy implications of this are well-known: traffic will disappear if you reduce roadspace. In north London, traffic could be suppressed further, for instance by removing general traffic from Camden High Street. If conditions for the on-street alternatives (buses, walking, bikes) are improved at the same time, all the better. In south London, the A road network could be simplified. Would it perhaps even be better to concentrate traffic on the Embankment, rather than creating a network of nasty junctions in Lambeth and Southwark?