Making small towns into wonderful places to live and work will mostly proceed by improving conditions for walking. Improvements for cycling and public transport are probably an irrelevant distraction.

A few days in Dorchester set me thinking about how small towns could wean themselves off car dependency, and become wonderful places to live – if they wanted to. There are hundreds of small market towns like this in Britain, though they don’t all have quite such a long history. 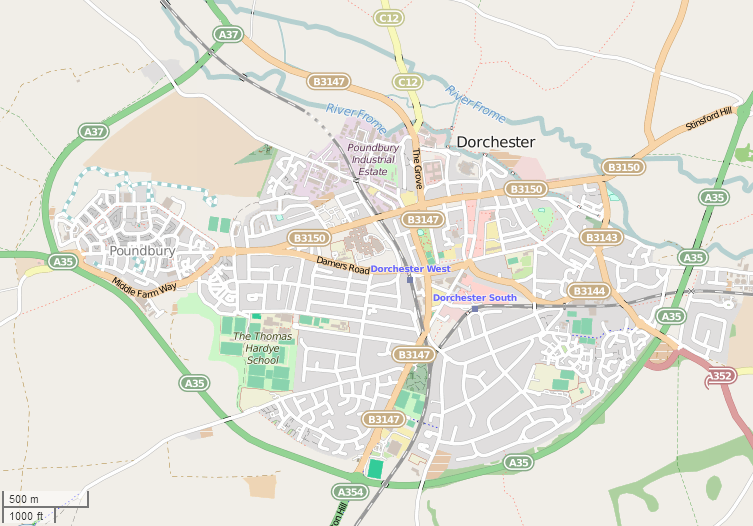 Dorchester was a Roman town, and is the traditional capital of Dorset, though its population is only about 20,000. The Romans have long gone, replaced by a pedestrianised shopping street, some car parks, an interesting range of Victorian-and-older houses, and some tree-lined walks.

Outside the pedestrianised centre, you soon realise that the car is dominant. Streets are mostly quite narrow, but have a steady flow of traffic, and guardrail and indirect crossings to keep pedestrians in their place. Turn the wrong way, and you’ll find an oversized junction, probably giving access to a car park, or a roundabout built to minimise delay to motorists.

The town is famous as the home of the Victorian poet and novelist, Thomas Hardy. He built himself a house on the outskirts of the town, and rather delightfully had a room just for bicycles, when they were the latest fashion (in the 1890s). The garden is now somewhat spoiled by noise from the bypass. You like to imagine that Thomas Hardy would still be riding his bicycle if he were alive today, but I’m afraid he’d probably have long since built a garage, and taken up driving.

This is very different from an equivalent Dutch town. There would be a dense centre, with an inner ring road built on the former defensive canal. Car parks would be further from the centre. The first suburbs would have been built later, with cycle tracks alongside the main roads into the centre. But the suburbs would be more extensive, reflecting the huge population growth in the Netherlands over the last few decades. There probably wouldn’t be an outer bypass, though there might be a motorway fairly close by. There wouldn’t be a Tesco (or any other large food store) on the bypass. The normal way of getting about town would be by bicycle, though quite a lot of people drive.

We can’t magically convert a British market town into its Dutch equivalent – the urban form, street form and land use structure are completely different. We can’t just look over the North Sea and copy what the Dutch have done. We have to find our own way.

It’s not even clear that the people of Dorchester want to change. Traffic congestion isn’t really a problem, and driving is convenient. Those who don’t have access to a car are at a disadvantage, but that’s probably a minority. There is a bus service that loops around the suburbs once an hour, but it’s almost exclusively used by the elderly. People living outside Dorchester will be even more dependent on the car. So seriously restraining the car is unlikely to be popular.

The small-town Italian model would be to restrict parking in the centre, giving bikes a significant advantage. But it’s unlikely that Dorchester’s residents would be quite so keen to cycle, because the culture has been lost, and the streets have been adapted for the convenience of motorists. Dorchester also has some hills, in stark contrast to the Po Valley.

So if we can’t restrict traffic very much, our only real option is to minimise its impact, by reducing speeds, and giving greater priority to pedestrians. The whole town could be a 20mph zone. Some people will already walk into town, and some others might be persuaded out of their cars if walking wasn’t such an obstacle course. Remove the guardrails, and use Zebra crossings to give pedestrians priority. Not many people will cycle, but simply slowing the traffic will make cycling a bit more tolerable.

In time this should reduce some of the demand for parking, as people walk instead. This might allow some of the most central parking to be converted into amenity space, maybe a new square with shops. Dorchester would become a more pleasant place to stop and walk around, and visitors would stay longer, recommend it more, and return sooner.

In Britain’s market towns, where the level of cycling and bus use is minimal, it’s probably more sensible to focus on improving conditions for pedestrians, gradually reducing the impact of traffic. Shared-space roundabouts, road narrowing, and better pedestrian crossings, like at Poynton in Cheshire, might be the better approach, even though this isn’t particularly cycle-friendly. In small towns, we should focus on pedestrians.